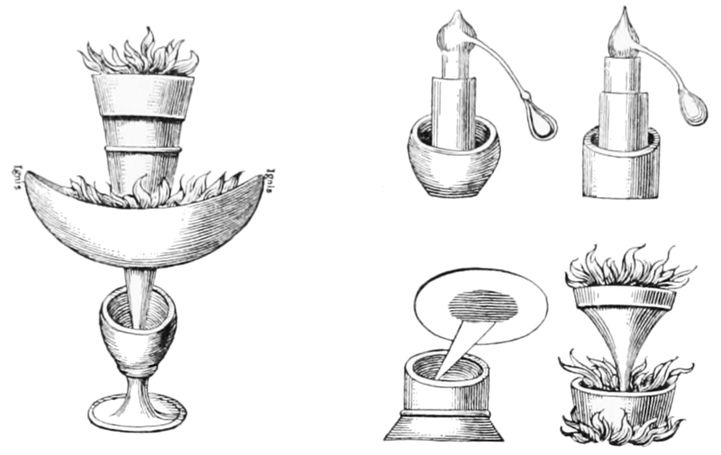 The present version of Jamshid and Zuhak, a single episode from The Book of the Kings, is from the translation by Reuben Levy, M.A., copyrighted in 1923 by the Oxford University Press, by whose permission it is here reprinted.

In the days when the world was young, there was a king who, from his capital in Iran, ruled the earth for seven hundred years. His name was Jamshid, and he was indeed a mighty monarch, for men and divs and birds and peris all obeyed him. The world grew prosperous under him, for he said: “I will prevent evildoers from working ill, and will guide all men aright.”

For fifty years he concerned himself with weapons of war, to open the path to glory for the valiant, and made helmets and lances and coats of mail. Then he turned to the making of garments for his people. He prepared stuffs of linen, of wool, of beaver skins and of rich brocade, and taught the people how to weave; and when the material was ready he showed them how to clean it and make it into garments. This being achieved, he devoted a space of time to seeking out the precious stones, and discovered such treasured things as ruby, yellow amber, silver, and gold. Then he invented perfumes, such as balm, camphor and pure musk, aloes, umber and rose-water. Thereafter he discovered medicine, remedies against every sickness, and the means of preserving health and of curing wounds. Thereby he made the world contented and was himself happy.

Three hundred years passed, and in that time death was unknown. There was neither pain nor sorrow, and the divs were kept in slavery, so that they never troubled men. But as time went on, the king became so powerful that he could see nothing in all the earth save himself, and by his arrogance incurred the anger of the gods.

Now there lived at this time in Arabia a king among the desert chief-tains and-the captain of many armed bands of horsemen. He possessed flocks and herds of goats, camels, and sheep, each a thousand strong, as well as cows and Arab horses. This generous king had a son Zuhak, who was brave, light-hearted, and care-free, and who was constantly engaged in wars against his enemies.

It happened one day that Iblis, the god of the divs, came to the palace disguised as a nobleman, and so pleased the young prince that he turned aside from his brave and noble way in order to follow the wicked div. Iblis rejoiced greatly, and said: “I know many things which none can learn except from me.” “Teach me them,” said the young man, “and do not delay.”