About the same time Moharib, the other brother, had a son born to him, whom he called Khaled. He chose this name out of gratitude to God, because, since his brother’s departure, his affairs had prospered.

The two children in time reached maturity, and their fame spread far and wide among the Arabians. Zahir had taught his daughter to ride horseback, and trained her in all the accomplishments fitting to a brave and daring warrior. He accustomed her to the severest labor, and the most perilous enterprises.

When he went to war, he put her among the other Arabs of the clan, and among these horsemen she soon took her rank as one of the most valiant of them. And thus it came to pass that she outstripped all her comrades, and would even attack the lions in their dens. At last her name inspired the greatest terror; when she had conquered a champion she never failed to cry out: “I am Djonder, son of Zahir, horseman of the clans.”

For his part, her cousin Khaled distinguished himself likewise by his brilliant courage. His father Moharib, a wise and prudent chieftain, had built places of entertainment for strangers; and horsemen found a welcome there. Khaled had grown up in the company of warriors. In this school his spirit had been moulded, here he had learned to ride, and had become at last an intrepid warrior, and a fear inspiring hero. It was soon perceived by the army that his spirit and valor were unconquerable.

Now at last he heard news of his cousin Djonder, and his eagerness to see and know him and witness his skill in arms became extreme. But he was unable to satisfy this desire because of the dislike his father showed for his cousin, his uncle’s son.

Khaled’s curiosity remained unsatisfied until the death of his father Moharib, which put him in possession of rank, riches and land. He followed the example of his father in entertaining strangers, protecting the weak and unfortunate, and giving clothing to the naked. He continued also to sweep the plains on horseback in company with his warriors, and thus became greater in bodily strength and courage.

After some time, gathering together a number of precious gifts, he set out, in company with his mother, to visit his uncle. He did not draw rein until he reached the dwelling of Zahir, who was very glad to see him, and made magnificent preparations for his entertainment; for the uncle had heard news on several occasions of this nephew’s worth and valor.

Khaled also visited his, cousin. He saluted her, pressed her to his bosom, and kissed her fore-head, thinking that she was a young man. He felt the keenest pleasure when he was in her company, and remained for ten days with his uncle, taking part in the tournaments and contests of horsemen and warriors. 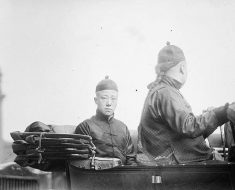 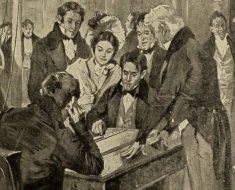