After long, long years, there came again a kings’ son to that country, and heard how an old man told about the briar hedge; that there was a castle behind it, in which a wonderfully beautiful king’s daughter called Briar Rose had been sleeping for a hundred years, and that the king and the queen and all the court were sleeping with her. He knew, too, from his grandfather that many kings’ sons had already come and tried to get through the briar hedge, but had all been caught in it and died a sad death. Then I lie young man said, “I am not afraid. I will go and see the beautiful Briar Rose.” The good old man might warn him as much as he pleased; lie did not listen to his words.

But now the hundred years were just passed, and the day was come when Briar Rose was to wake again. So when the king’s son went up In l lie briars, they were just great beautiful flowers that opened of their own accord and let him through unhurt; and behind him they closed together as a hedge again. In the yard he saw the horses and the mottled hounds lying and sleeping; on the roof perched the doves, their heads stuck under their wings; and when he came into the house the flies were sleeping on the wall, in the kitchen the cook still held up his hand as though to grab the boy, and the maid was sitting before the black hen that was to be plucked.

Then he went further, and in the hall saw all the courtiers lying and sleeping, and upon their throne lay the king and the queen. Then he went further, and all was so still that you could hear yourself breathe; and at last he came to the tower and opened the door of the little room where Briar Rose was sleeping. There she lay, and she was so beautiful that he could not take his eyes off her; and he bent down and gave her a kiss. But just as he touched her with the kiss, Briar Rose opened her eyes, awoke, and looked at him very kindly.

Then they went downstairs together; and the king awoke, and the queen, and all the courtiers, and made great eyes at one another. And the horses in the yard got up and shook themselves, the hounds sprang about and wagged their tails, the doves on the roof pulled out their heads from under their wings, looked around and flew into the field, the flies on the wall went on crawling, the fire in the kitchen started up and blazed and cooked the dinner, the roast began to sputter again, and the cook gave the boy such a box on the ear that he screamed, and the maid finished plucking the hen. Then the wedding of the king’s son with Briar Rose was splendidly celebrated, and they lived happy till their lives’ end. 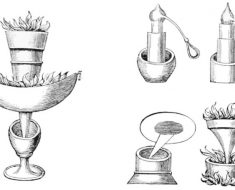 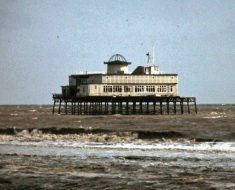