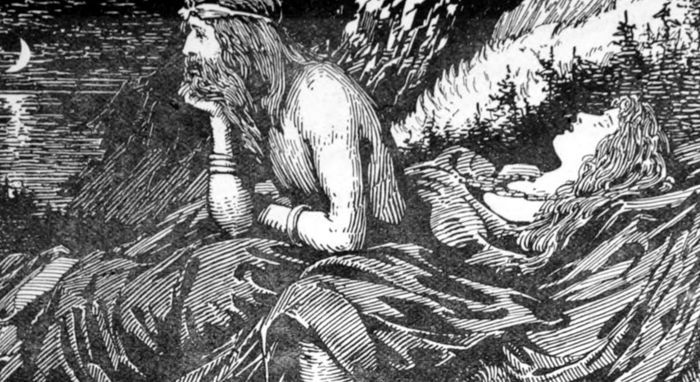 The Volsmga Saga, one of the most beautiful and highly finished of all the many Icelandic sagas, is a composite work based upon the Elder Edda, oral tradition, songs, and chronicles. Like most of the sagas, it consists of many incidents woven together.

The present version, translated by William Morris and Magnus- son, is from The Story of the Volsungs, Camelot Series, London, no date. It is the fourteenth chapter, and the full title is Regin`s Tale Of His Brothers, and of The Gold Called Andvari`s Hoard. It is reprinted by permission of the Morris trustees.

(From the Volsunga Saga)

“Nphus the tale begins,” said Regin. “Hreidmar was my father`s name, a mighty man and a wealthy: and his first son was named Fafnir, his second Otter, and I was the third, and the least of them all both for prowess and good conditions, but I was cunning to work in iron, and silver, and gold, whereof I could make matters that availed somewhat.

Other skill my brother Otter followed, and had another nature withal, for he was a great fisher, and above other men herein; in that he had the likeness of an otter by day, and dwelt ever in the river, and bare fish to bank in his mouth, and his prey would he ever bring to our father, and that availed him much: for the most part he kept him in his otter-gear, and then he would come home, and eat alone, and slumbering, for on the dry land he might see naught. But Fafnir was by far the greatest and grimmest, and would have all things about called his.

“Now,” says Regin, “there was a dwarf called Andvari, who ever abode in that force, which was called Andvari`s force, in the likeness of a pike, and got meat for himself, for many fish there were in the force; now Otter, my brother, was ever wont to enter into the force, and bring fish aland, and lay them one by one on the bank. And so it befell that Odin, Loki, and Hcenir, as they went their ways, came to Andvari`s force, and Otter had taken a salmon, and ate it slumbering upon the river bank; then Loki took a stone and cast it at Otter, so that he gat his death thereby; the gods were well content with their prey, and fell to flaying off the otter`s skin; and in the evening they came to Hreidmar`s house, and showed him what they had taken:

Read More about He who Married a Dumb Wife

Previous: The Shepherdess and the Sweep part 4
Next: Regin`s Tale part 2