While walking slowly, she sees her husband and the viscount, his companion, crossing the gangplank and entering the ship.

The group of people looking after them are standing, here and there, on the pier. Almost all of them are those who came to bid adieu to her husband and the viscount. Perhaps there are no other passengers on this ship about to sail who are so important and are looked at by so many people.

Some of them are going to the foot of the stool on which the gangplank is laid, and stop there to wait for their companions. Some of them are standing at the place, a bit before the stool, where the blocks and ropes are laid down.

Among these people there must be some who are intimately known to her husband, and some who know him but slightly. But, standing under this clear sky, they all seem dejected; or is it only her fancy?

Following slowly after them, unconsciously she looks off to her right where there were many round windows on the side of the ship. The faces and chests of women are seen from one of those round windows.

There is also a woman at the bulwark, looking down on the pier, who wears a big bonnet with white cloth and carries a small leather bag in her hand. Two big eyes, as if painted with shadows, are shining on her wrinkled face above the large nose, like a hook. She looks like 11 Jewess. She also must be a traveler who is going on this ship. She is also envious of her.

At last she arrives at the foot of the gangplank. Cautiously she carries her body, which has the second infant of her husband under the Azuma coat, and descends on the deck of the big, black-painted ship. She hands the umbrella to a maidservant.

Led by the people who have come to say farewell and were already on board, she goes back along the bulwark toward the prow. There are rooms for passengers at the end of the way, the numbers of which increase from twenty-seven to twenty-nine.

The viscount is standing at the entrance and addresses her. 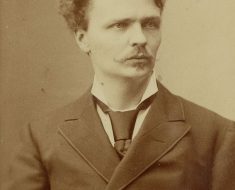 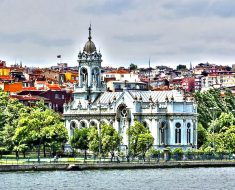