The Priest and the Mulberries

Practically nothing is known of the author of this pleasant little Fabliau. Compared with the great majority of surviving stories of its kind, it is remarkably free from the coarseness which characterizes the Fabliau, particularly when it deals with the clergy.

The present version is translated by Eugene Mason, in the volume Aucassin and Nicolette and Other Medieval Romances and Legends. Published in Everyman`s Library, J. M. Dent and Sons, by whose permission it is here reprinted. The title of the story in the original is The Priest Who Ate Mulberries.

The Priest and the Mulberries

A certian priest having need to go to market, caused his mare to be saddled and brought to his door. The mare had carried her master for two years, and was high and well nourished, for during these years never had she known thirst nor hunger, but of hay and of oats ever had she enough and to spare.

The priest climbed to the saddle and set out upon his journey, and well I remember that it was the month of September, for in that season mulberries grow upon the bushes in great plenty and abundance. The priest rode upon his way repeating his hours, his matins and his vigils.

As he drew near the gate of the town the path ran through a certain deep hollow, and raising his eyes from his book the priest marked a bush thick with mulberries, bigger, blacker and more ripe than any he had ever seen. Desire entered his heart, for very covetous was he of this fair fruit, and grad¬ually checking the pace of his mare, he presently caused her to stand beside the bush.

Yet one thing still was wanting to his delight. The mulberries near the ground were set about with spines and thorns, whilst the sweetest of all hung so high upon the tree that in no wise could he reach them from his seat. This thing the priest saw, so in a while he climbed up, and stood with his two feet upon the saddle, whence by leaning over a little he could pluck the fruit.

Then he chose the fairest, the ripest, and the sweetest of all these Aiulberries, eating them as swiftly and greedily as he might, whilst the mare beneath him moved never a whit. Now, when this priest had eaten as many mulberries as he was able, he glanced downwards, and saw that the mare was standing still and coy, with her head turned towards the bank of that deep road. Thereat the priest rejoiced very greatly, for his two feet were yet upon the saddle, and the mare was very tall.

Tags: The Priest and the Mulberries 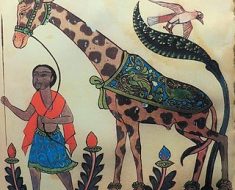