Erh-ch’eng was quite well off, but his brother would not apply to him, neither did he himself offer to help them. Tsang-ku, too, would have nothing to do with her sister-in-law, because she had been divorced; and Shan-hu in her turn, knowing what Tsang- ku’s temper was, made no great efforts to be friendly. So the two brothers lived apart; * and when Tsang-ku was in one of her outrageous moods, all the others would stop their ears, till at length there was only her husband and the servants upon whom to vent her spleen. One day a maidservant of hers committed suicide, and the father of the girl brought an action against Tsang-ku for having caused her death.

Erh-ch’eng went off to the mandarin’s to take her place as defendant, but only got a good beating for his pains, as the magistrate insisted that Tsang-ku herself should appear and answer to the charge, in spite of all her friends could do. The consequence was she had her fingers squeezed f until the flesh was entirely taken off; and the magistrate being a grasping man, a very severe fine was inflicted as well. Erh- ch’eng had now to mortgage his property before he could raise enough money to get Tsang-ku released; but before long the mortgage threatened to foreclose, and he was obliged to enter into negotiations for the sale of it to an old gentleman of the village named Jen.

Now Mr. Jen knowing that half the property had belonged to Ta-ch’eng, said the deed of sale must be signed by the elder brother as well; however, when Ta-ch’eng reached his house, the old man cried out, “I am Mr. An, M.A.; who is this Jen that he should buy my property?” Then, looking at Ta-ch’eng, he added, “The filial piety of you and your wife has obtained for me in the realms below this interview”; upon which Ta-ch’eng said, “O father, since you have this power, help my younger brother.” “The unfilial son and the vixenish daughter-in-law,” said the old man, “deserve no pity. Go home and quickly buy back our ancestral property.” “We have barely enough to live upon,” replied Ta-ch’eng; “where, then, shall we find the necessary money?” “Beneath the crape myrtle-tree,” answered his father, “you will find a store of silver, which you may take and use for this purpose.”

Ta-ch’eng would have questioned him further, but the old gentleman said no more, recovering consciousness shortly afterwards without knowing a word of what had happened. Ta-ch’eng went back and told his brother, who did not altogether believe the story; Tsang-ku, however, hurried off with a number of men, and had soon dug a hole four or five feet deep, at the bottom of which they found a quantity of bricks and stones, but no gold. She then gave up the idea and returned frome, Ta-ch’eng having meanwhile warned his mother and wife not to go near the place while she was digging. When Tsang-ku left, Mrs. An went herself to have a look, and seeing only bricks and earth mingled together, she too, retraced her steps. 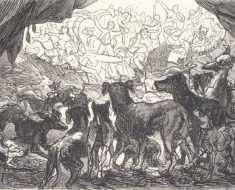