But Ducas was not idle; when the sun reached the meridian, he and the whole army got under arms. As soon as the sun began to turn, he formed up his lines and with war cries and tremendous shouting rushed upon the barbarians. However Tzachas was not found unprepared for he quickly had his men fully armed and joined battle with the Roman lines. A very strong wind was blowing at the time and when the battle became very close the dust was whirled in clouds right up to heaven.

And thus, firstly because they had the sun shining in their faces, and secondly because the wind somewhat obscured their sight owing to the dust, and also because the Romans drove on the attack more vigorously than ever, the barbarians were utterly discomfited and fled. After this battle Tzachas felt he could not endure the siege any longer and was too weak for continuous fighting, and therefore sued for peace, making only one stipulation that he should be allowed to sail to Smyrna unmolested.

Ducas agreed to this, and retained two of the chief satraps as hostages; whereupon the other asked Ducas for hostages, and on condition that Tzachas on his side would not do injury to any of the Mityleneans before leaving, nor carry any of them away with him on his voyage to Smyrna, and that Ducas on his side would guarantee him a safe voyage to Smyrna, Ducas gave him Alexander Euphorbenus and Manuel Butumites; both fond of war, and brave men.

After giving mutual assurances, the one felt relieved because Tzachas would not injure the Mityleneans before leaving and the other because he would not suffer ill usage from the Roman fleet on his journey. But ‘the crab never learns to walk straight,’ no more did Tzachas depart from his former villainy, for he attempted to carry off all the Mityleneans together with their wives and children.

While he was arranging this, Constantine Dalassenus, now ‘Thalassocrator,’ who had up till then not arrived as Ducas had ordered, brought his ships to anchor near a promontory and when he heard what was going on, he went and asked Ducas for permission to engage in battle with Tzachas. But Ducas, respecting his recently pledged word, demurred for a while. However, Dalassenus insisted saying, “you gave an oath but I was not present, so do you keep your promises unbroken, but as I neither swore nor was present and know nothing of what you two arranged between you, I shall now strip myself for combat against Tzachas.” 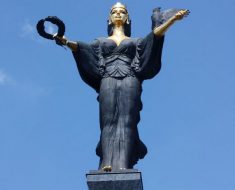