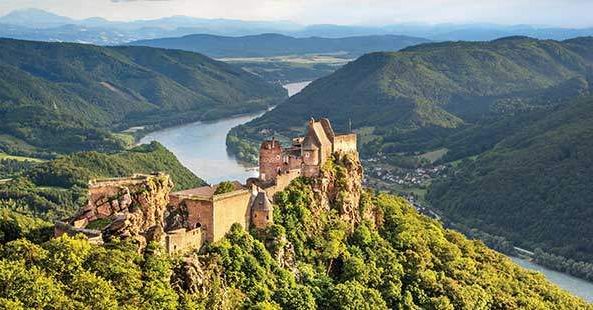 A Breath of Fresh Art on the Danube

Art town Krems and theWachau region are where high-value art meets a of world culture.

Three girls hold one another by the hand, their faces turned inwards and completely concealed by their long black hair. The secretive sculpture by German artist Simon Schubert is part of the current exhibition at the Kunsthalle Krems. Glance upwards for a moment, and you see yourself being watched by nothing but children`s eyes gazing down on visitors from the portraits all around. The exhibition “Of Angels and Rascals” is devoted – as always, with highly interesting cross-references – to children`s portraits spanning four centuries, and ranging from Francisco Ignacio Ruiz dela Iglesia to Maja Vukoje.

The factory used to be where Austria Tabak made its cigarettes, but since the congenial conversion by Adolf Krischanitz was completed in 1995, what became the Kunsthalle Krems has rapidly established itself as one of the most important new exhibition spaces in Austria today. Illuminating associations spanning centuries are the norm rather than the exception here, and visitors to the exhibition in July – which fuses artists` group Gelitin with British artist Sarah

Lucas and Hieronymus Bosch -can look forward to more of the same. Then it`s along the Art Mile for a brief look around Factory, the Kunsthalle`s window on young, contemporary art production, and the Forum Frohner, housed in Stein Minorite monastery, where a work by Frohner dating back to the 1960s is confronted by photos by Brassai and various pieces by graffiti artists – more curious cross-references, so it would seem.

And then there`s Manfred Deix, of course: the oeuvre of the great Austrian caricaturist has been a pivotal focus of the Karikatur museum for ten years now, along with various temporary exhibitions and the guips of Gustav Peich l, who, in his second guise as an architect, was also responsible for the flat construction of the building with its wildly enhanced roof. You have to doubt, however, whether occupants of the notorious Stein Prison, which lies just over the road, have quite as much to laugh about as visitors to the Carikatur museum.

At the other end of the Art Mile, you can walk more or less directly onto a boat; what other museum, I wonder, can boast its own direct link to Danube shipping routes? After all these cultural pleasures, then, the time has come for us to devote our energies to the jaw-dropping natural beauty of these parts. And within a few minutes, we are sliding silently along atop the waves of a surprisingly fast-flowing Danube, aboard one of the dazzlingly white excursion ships that ply the stretch of the river leading through the wonderful green hills of the Wachau.

It could all have been so different, so functional – but the hydroelectric power station that was to be built at Durnstein in the early seventies was eventually cancelled due to the vehement objection of the local population. So we move upstream not past billowing chimneys, but by following the idyllic twists and turns of the Danube instead. We slide past the much-photographed light-blue church tower of Durnstein monastery, the Gothic fortified church at Weifienkirchen and Schonbuhel Castle – resplendent upon its throne of solid rock over the water, and once the imposing home to the noble families who controlled the river here in the Middle Ages.

The banks of the river today are bordered by orchards, while countless rows of vineyards nestle above them in the hills in terraces that reach almost to the very top. It`s only as the impressive Melk monastery slides into view from behind the tall trees on the bank that you realise exactly why the Wachau has been a UNESCO World Cultural Heritage site since 2000. Hardly any other stretch of land in Austria can boast such a heady mix of history, nature and cultural landscape.

Suddenly the ship`s captain moves up a gear, and we accelerate forwards. After turning round at Melk, the strong current takes us back downstream, only for all that natural splend our on the bank to rapidly retreat backwards, while the headwind ruffles the hairstyles of the passengers up on deck. And you wish you could somehow take the strong breeze with you back into the museum-perhaps it would help you reveal the secrets hidden in the faces of the three girls in the Kunsthalle.

Read More about Treasures of Varna