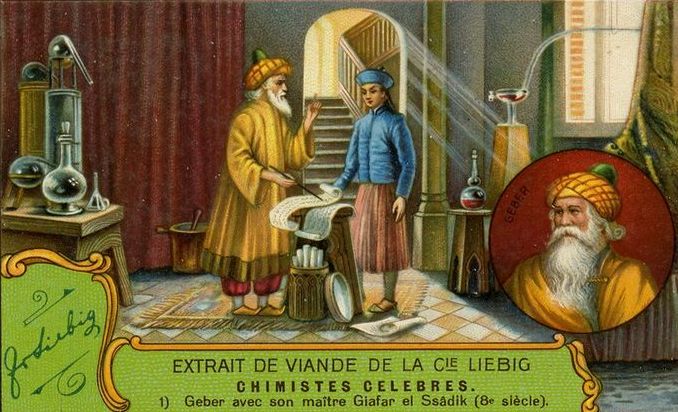 Zuhak was pleased and commended his cook, who said, “To-morrow I will prepare for your Majesty a dish than which nought is more perfect.” And the next day, when the blue dome of heaven was lighted by the red ruby of the sun, he prepared a dish of partridge and of silver pheasant, which the Arab ruler ate; and thus he abandoned his imprudent mind to the power of Iblis, who, on the third day, placed upon the table a mixture of birds and lambs` flesh. On thefourth day, when the meal was brought, the king feasted on the flesh of a young calf seasoned with rose-water, old wine, and pure musk.

The meal filled him with delight at the skill of bis cook, and, summoning him, he said, “Think what it is that you desire, and ask it of me.” Iblis replied, “I have but one request to make of the king (may he live prosperous forever), but that is an honor too great for me; it is that I may be permitted to kiss his shoulders and to touch them with my eyes and face.”

Zuhak suspected nothing of his intention, and said: “I grant your wish; it may be that some honor will thereby accrue to your name,” and he bared his shoulders to him as to a friend. Iblis kissed them and vanished from the earth. But from each of Zuhak`s shoulders appeared a black serpent, and Zuhak became sick at heart and sought on all sides for a remedy.

Finally he bade that the serpents be cut off close to his shoulder, but they grew again. Every physician and wise man in the kingdom tried his remedies, but all in vain. The last to come was Iblis himself, who appeared as a physician before Zuhak. “It was inevitable,” said he, “that this should happen. Leave the serpents and do not cut them off while there is life in them. To appease them you must feed them on the brains of men, which alone will at last slay them.”

While these events were taking place at the court of Arabia, great tumults filled the land of Iran. The arrogance of Jamshid had set his subjects in revolt against him, and a great army marched towards Arabia from the highlands of Iran. They had heard that in Arabia there was a man with a serpent`s face that inspired terror in men, and to him they went in order to elect him as their king. Zuhak eagerly returned with them and was crowned, and, turning his eyes towards the throne of Jamshid, began to treat the world familiarly as if it were the ring upon his finger.