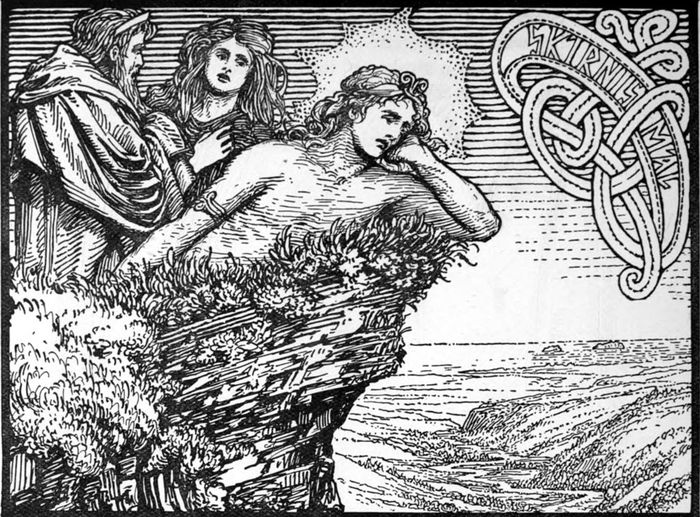 Thereon he laid hands on them, and doomed them to such ransom, as that they should fill the otter skin with gold, and cover it over without with red gold; to they sent Loki to gather gold together for them: he came to Ran, and got her net, and went therewith to Andvari`s force, and cast the net before the pike, and the pike ran into the net and was taken. Then said Loki

“ `What fish of all fishes,

Swims strong in the flood,

But hath learnt little wit to beware? Thine head must thou buy, From abiding in hell,

And find me the wan waters flame.`

Over many a force have I fared; For a Norn of ill-luck,

This life on me lay Through wet ways ever to wade.`

“So Loki beheld the gold of Andvari, and when he had given up the gold, he had but one ring left, and that also Loki took from him; then the dwarf went into a hollow of the rocks, and cried out that that goldring, yea and all the gold withal, should be the bane of every man who should own it thereafter.

“Now the gods rode with the treasure to Hreidmar, and fulfilled the otter-skin, and set it on its feet, and they must cover it over utterly with gold: but when this was done then Hreidmar came forth, and beheld yet one of the muzzle hairs, and bade them cover that withal; then Odin drew the ring, Andvari`s loom, from his hand, and covered up the hair therewith; then sang Loki

A great weregild, thou hast,

That my head in good hap I may hold;

But thou and thy son Are naught fated to thrive,

The bane shall it be of you both.`

“Thereafter,” says Regin, “Fafnir slew his father and murdered him, nor got I aught of the treasure, and so evil he grew, that he fell to lying abroad, and begrudged any share in the wealth to any man, and so became the worst of all worms, and ever now lies brooding upon that treasure: but for me, I went to the king and became his master-smith; and thus is the tale told of how I lost the heritage of my father, and the weregild for my brother.”