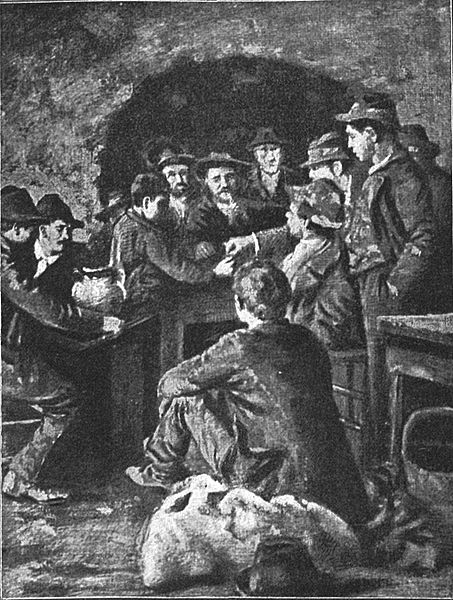 Evidences of poverty and misery and signs, of a life of hardship were manifested by the instruments themselves; the voice of weariness and anguish cried out in the squeaking violins, the discordant harps, the coughing and wheezing flutes and trombones, and the loosely strung tambourines held out by tired hands to receive charity.

From time to time I heard a voice melodious, but impaired by ill- usage, the remains of a former glory, which drew the curious to the window and gave their faces an expression of sorrow that such a precious article should be destroyed. The accent and modulation were those of the stage, and the story could be readily divined: from the theater to the cafe, from the cafe to the tavern, from the tavern to the courtyard, and then to the hospital. And was it strange that the singer continued in adversity to ask bread of the art which had so lavishly provided for him in better days, when so many without voice, without ear, without musical sense, resort to song as a means of livelihood? But how pitiful the open mouth from which no melody issues, this childish pretense intended to save the last vestige of shame at asking, without giving something in return.

Then the blind would come, led by companions who could still distinguish a faint glimmer of daylight, and must provide sight for two; then old men and women in peasant costumes, singing with shrill voices the same monotonous song, the only one perchance they had known in the hamlet where they were born, lank and long-haired, with sinister features and casting thievish glances about. Children came also, even the tiny ones, pretty in spite of their rags, the cords of their necks swelling, and all the forces of their emaciated bodies working in unison in their efforts to sing. What will be their lot, poor little forsaken songbirds? While other children sing from sheer happiness, their singing is surely a punishment.

I heard head notes and notes from the nose, intermittent as over broken keys or tremulous like the bleating of a lamb; voices squeaking and hollow, scarcely to be recognized as human; bass voices which sang tenor airs; baritone singing soprano, all lost to shame of discord, and audaciously omitting the high notes or substituting false ones of their own with the barefaced effrontery of a quack who feels he can cheat with impunity. All the injury which the human vocal organs can suffer —the crimes they can commit were there.