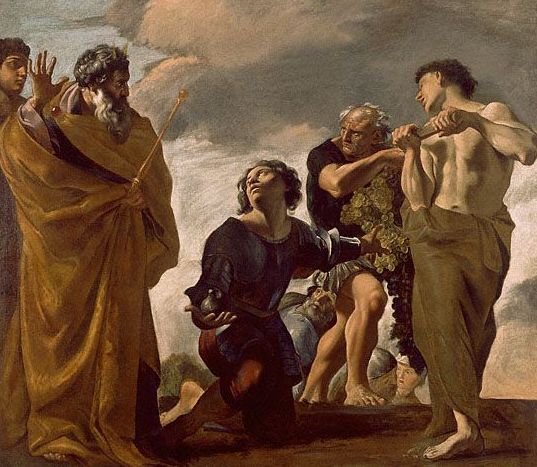 “Of all the young men of the village, Christos was the tallest; he was strong and fearless—a true pallicare; and, as we all know, danger often makes even the coward brave. Suddenly he dropped his right arm and tightly squeezed the wolf`s neck under his armpit, while with his left he clutched her head and tried to strangle her.

“The struggle was frightful. The teeth .and claws of the mad beast dug into the poor fellow`s side; he could not use his knife, because to draw it from his girdle he would have had to let go the wolf`s neck, which he still held with his left hand. He could not move his right arm without loosening his vise-like grasp upon her, and he dared not call for help, for he knew too well that he had no strength to waste in shouting.

“At last they fell to the ground, clasped in a horrible embrace. Christos was on the top, but the wolf had her head free against his breast, and she tore it savagely, in her efforts to release herself.

“Christos felt himself growing weak, and began to lose courage, when suddenly he heard the voice of old Mitros:

“The sheep in their flight had come to the old man`s cottage. Much surprised, he opened his door, and saw Christos in the distance wrestling with the wolf. He hastily snatched his gun from the wall, and started on a run as fast as his old legs would carry him.

“When he reached the pine-tree and saw the two upon the ground, he did not dare to shoot at the beast, for fear of wounding the man. But Christos took fresh heart at the thought of help, and, pushing the wolf`s head as far as he could away from his breast, cried, `Fire!` The old man lost no time in pressing the muzzle of his gun against the beast`s ear, and fired. The wolf rolled over, dead.”

Father Seraphim was silent for some minutes. None of us disturbed him, for we saw that he had more to tell us, and waited.

Meanwhile the sun had set, and it was growing dark in the corners of the room. The ladies were still out on the balcony, and we could hear snatches of their merry talk and laughter.

“My friends,” continued the priest, “do you know what I was just thinking about? It is a thought that comes to me often; I was thinking of what our ignorance costs us. How many evils we could avoid, or at least lessen if we only knew a little more. But who is there to teach us? We are making progress, it is true, but we are still far behind.