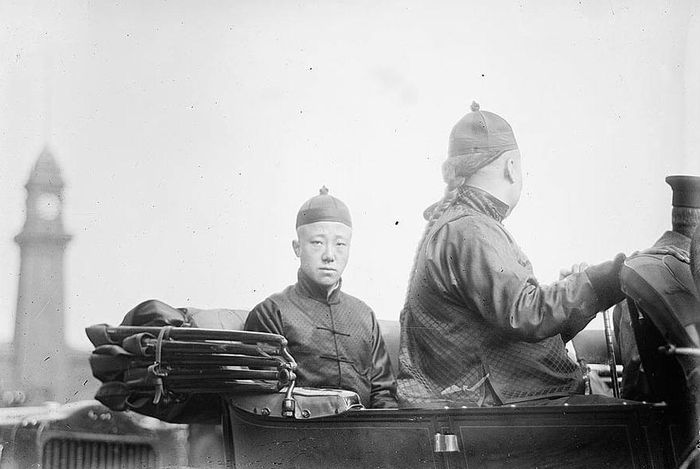 I had better die.” Thereupon she drew a pair of scissors and stabbed herself in the throat, covering herself immediately with blood. The servant prevented any further mischief, and supported her to the house of her husband`s aunt, who was a widow living by herself, and who made Shan-hu stay with her. The servant went back and told Ta-ch`eng, and he bade her say nothing to any one, for fear his mother should hear of it. In a few days Shan-hu`s wound was healed, and Ta-ch`eng went off to ask his aunt to send her away. His aunt invited him in, but he declined, demanding loudly that Shan-hu should be turned out; and in a few moments Shan-hu herself came forth, and inquired what she had done.

Ta-ch`eng said she had failed in her duty towards his mother; whereupon Shan-hu hung her head and made no answer, while tears of blood trickled from her eyes and stained her dress all over. Ta- ch`eng was much touched by this spectacle, and went away without saying any more; but before long his mother heard all about it, and, hurrying off to the aunt`s, began abusing her roundly. This the aunt would not stand, and said it was all the fault of her own bad temper, adding: “The girl has already left you, and do you still claim to decide with whom she is to live? MissCh`en is staying with me, not your daugh- ter-in-law; so you had better mind your own business.” This made Mrs. An furious; but she was at a loss for an answer, and, seeing that the aunt was firm, she went off home abashed and in tears.

Shan-hu herself was very much upset, and determined to seek shelter elsewhere, finally taking up her abode with Mrs. An`s elder sister, a lady of sixty odd years of age, whose son had died, leaving his wife and child to his mother`s care. This Mrs. Yu was extremely fond of Shan-hu; and when she heard the facts of the case, said it was all her sister`s horrid disposition, and proposed to send Shan-hu back. The latter, however, would not hear of this, and they continued to live together like mother and daughter; neither would Shan-hu accept the invitation of her two brothers to return home and marry some one else, but remained there with Mrs. Yii, earning enough to live upon by spinning and such work.